When we planned the Encyclopediaof Milwaukee (EMKE) in the late 2000s, we wanted to invite user comments. But also we wanted to be able to moderate the comments. The quality of user comments on news stories was notoriously low, and we were warned that we would spend a lot of time deleting Viagra ads and other spam. So our IT team set up our site so that users have to register before they can comment. A moderator has to release a comment before it is visible to the public. We’ve been open for comments since our first entries went live in March of 2016.
The project is having a long and slow soft launch while we get all 700 entries through our workflow. So it’s not surprising that we did not get a lot of registrations, much less comments, to start off. But beginning around September 2016, we had a noticeable uptick in newly registered accounts.
The Encyclopedia of Milwaukee is a locally-oriented digital history project. We expected that most of the people who wanted to register and leave comments would be from the Milwaukee area. But the handles and domain names of our new registrations did not look like we expected. Many were nonsense words; the extensions weren’t the familiar .com and .orgs; some were clearly spammers; and, fascinatingly, many ended with .ru. As in Russia. These new registrants didn’t leave comments. They just signed up and vanished again. Mysterious, eh?
For a while we just watched the registrations mount. Because digital history projects are collaborative, a whole team of people keeps tabs on site use. We want to make sure we don’t miss a legitimate comment, so I felt obliged to look at all the new user notifications and forward them to my colleagues with a note that I was ignoring this one or that one. Eventually process this got tiresome, especially given the ratio of legitimate users to spammers. So in 2018, we had our IT team install a Stop Spammers plug-in to filter out bots. Between June 20, 2018 and May 20, 2019, it stopped 35,231 registrations.
But I couldn’t get the Russian registrations out of my head. What did they mean? Why did they target the Encyclopedia of Milwaukee? We all know about “Russian interference in the 2016 US election.” But how did the apparently harmless effort to sign up with my digital history project fit in to this picture? Was it a side effect of a fundamentally political project, or was the interference in the election itself a piece of a larger effort? Whatever their political views, historians are intellectually conservative folk. We know that to see the big picture, we need to have all the pieces to look at—or at least enough pieces to be confident that we aren’t missing something huge. I would like to know what these registrations mean, but I’m not ready to pronounce a historical analysis of them.
Instead, I decided to write a poem, to share a sense of the experience and throw out to the world my piece of the picture. That’s why I wrote “Russian bots, a found poem.”

How did I compose this poem? While my students were taking their final exam last week, I found all the user notifications for the EMKE and manually pulled out every username and email address that looked to me like spam. I didn’t think to harvest the time stamps on the registrations so that I could make some inferences about whether they might have originated with people working in other time zones, and I don’t have the technical chops to scrape the data out of my email. I ended up with a list of 214 distinct registrations. I then separated each registration into three component parts: user registration name, the email handle, and the domain name of each email address. Just for fun, I visualized each set of components using WordClouds.com.
Here are the domains. I wanted to keep the @ signs with the domains, but again I am not technically proficient enough to stop the word cloud generator from deleting them. 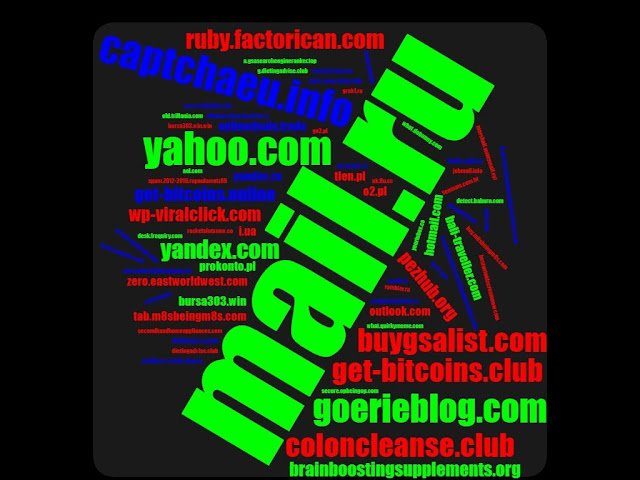 Here are the email handles: 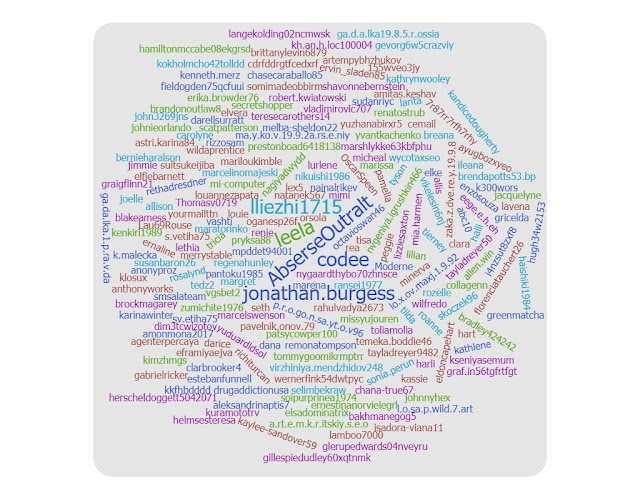 Here are the usernames registered on the EMKE website: 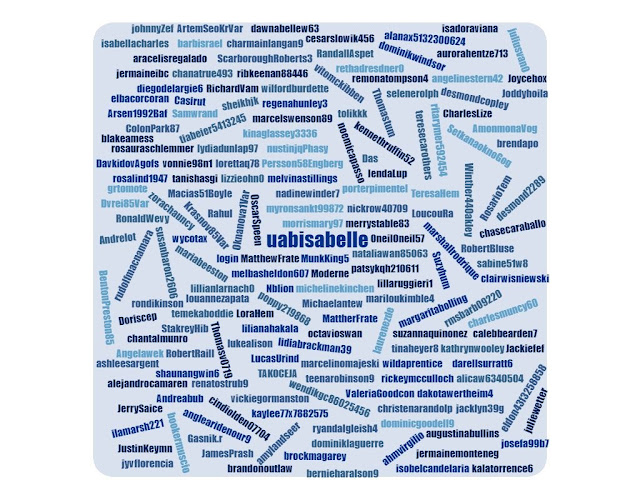 To compose the poem, I compiled all three lists back into one dataset and alphabetized them using Excel. My plan was to make an acrostic poem using the first letter of the elements (excluding the @ signs). Based on my dataset, I had the entire English alphabet at my disposal—except Q and X—and many choices within some letter groups. Next I posed the question “Why were so many Encyclopedia of Milwaukee registrations Russian?” and arranged it vertically to create the acrostic. Then I inspected my list of usernames, handles, and domains and chose the ones that seemed most interesting and appealing, matching each to an appropriate letter in the acrostic. I was careful only to use a given option once in the poem even if it appeared multiple times on my list. I’m a humanist, so I felt perfectly comfortable making impressionistic rather than systematic selections. I retained the original capitalization and punctuation. Each of these “words” then became its own line in the poem, which ends with my inserted question mark. I visualized the poem as a picture using Branah.com’stext-to-image converter.

Posted by Amanda Seligman at 10:16 AM